Past Matt didn’t do his damn post so here I am, Present Matt, fixing that jerk’s mistakes.

A lot has happened since 46! Gamercow is home!!

The Avenging Hammers flew an honor guard for the last few jumps of his final leg. Here we are hanging out waiting for him at the rendezvous. 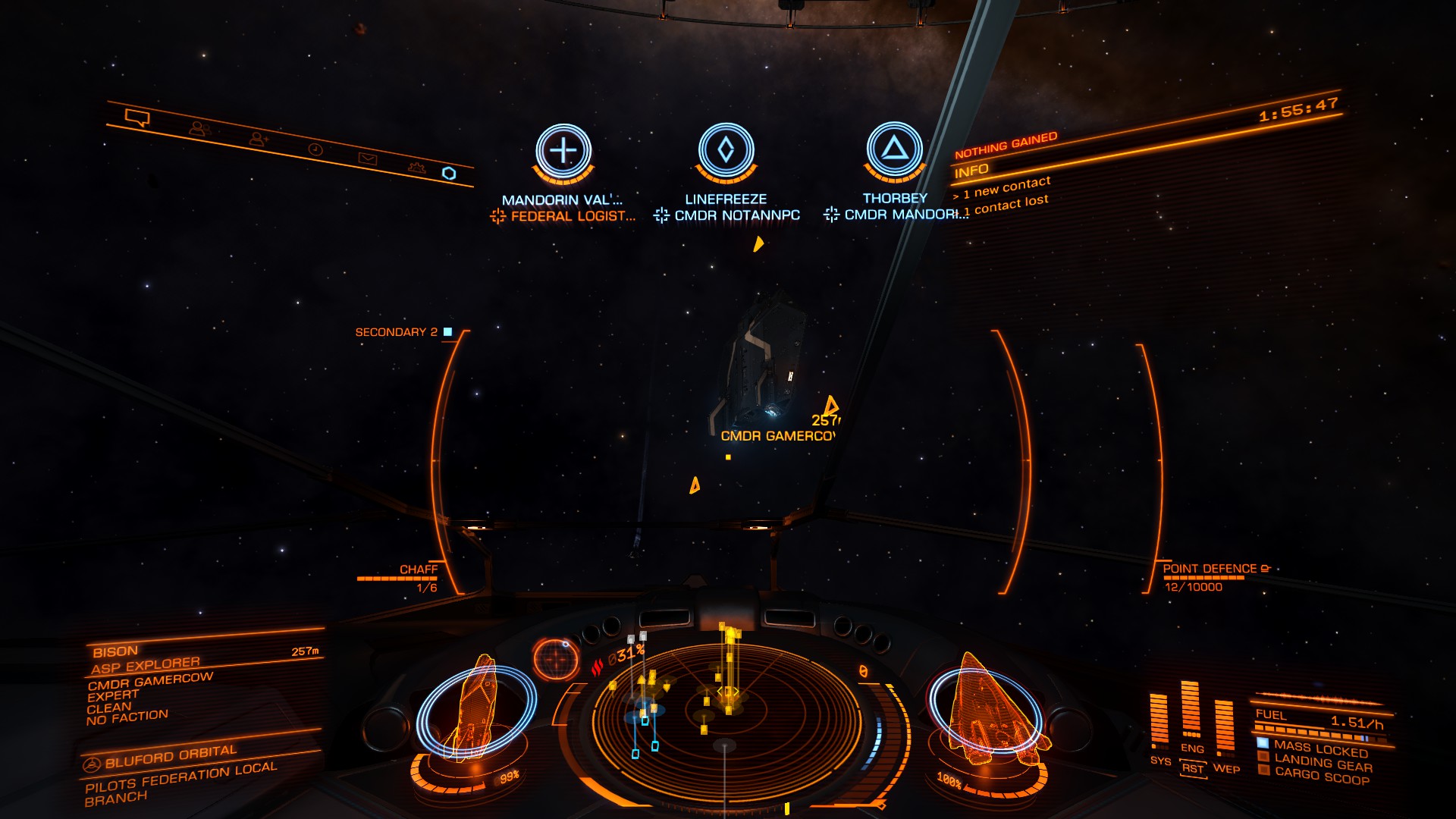 While he was docking at the rendezvous station, two Belugas started doing it in the mail slot and both met a fiery, climactic finish.

After the mail slot was cleaned up, we all jumped back home and Gamercow was presented with The Silver Arrow.

After that it was missions and money for me. I’d say a large bulk of the money I’ve made for the past few months have been from Sentry Skimmer missions. For these, you go out to a planet, land, and just blow up Sentry Skimmers in the SRV. You take down 8-12 and can make 3-5 million. I think in the last patch, they got a little harder though. I’ve also found the higher security a base has, the more fire power the skimmers have. Some of them even have shields and missile launchers. 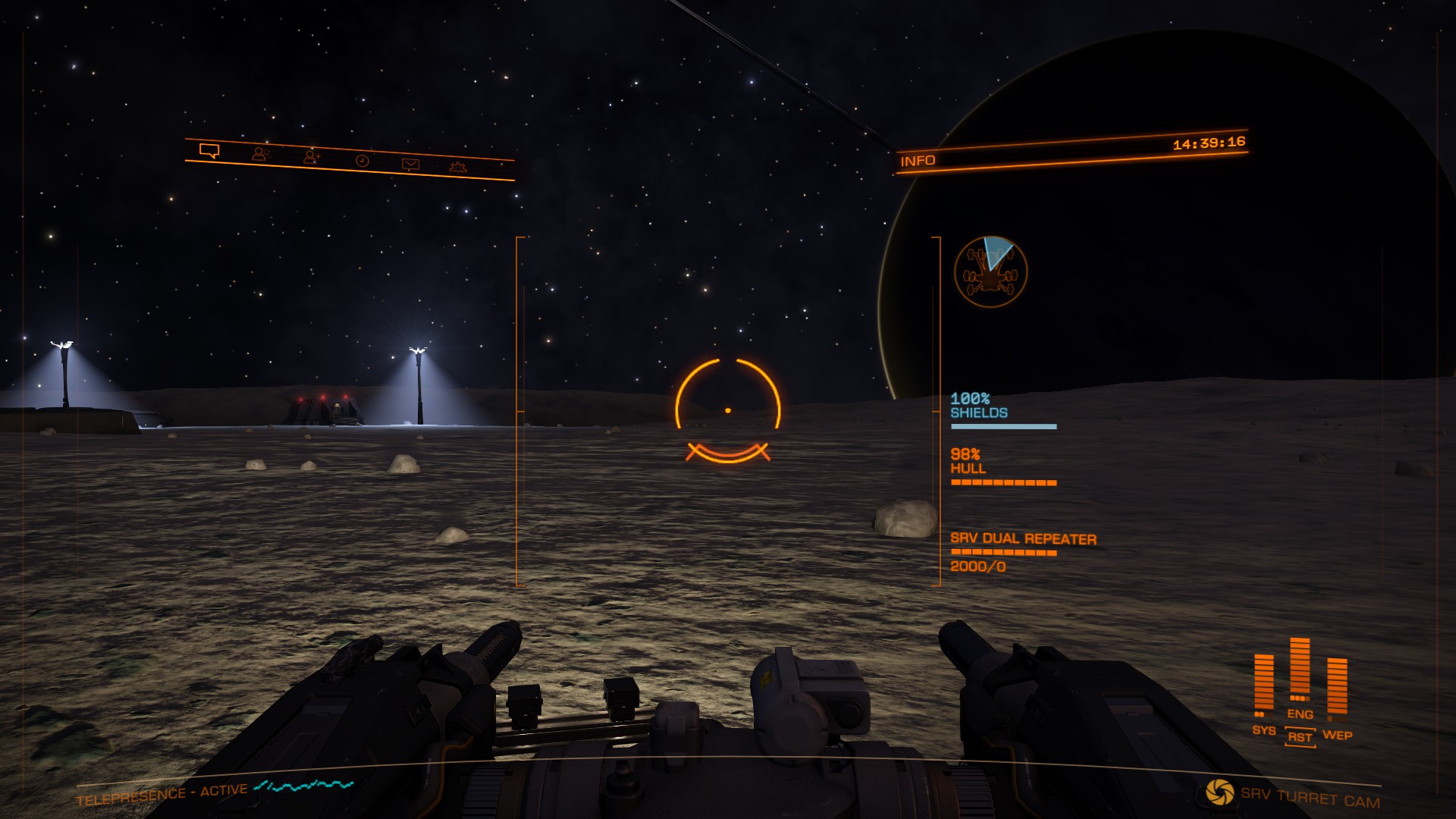 The risk/reward for me in this has turned me away a bit. Also, since I’m seeing high volume delivery missions pay out close to 4 million I’m more partial to them because they take a lot less time. Often, in Sentry missions, I have to log out and log back in to get them to respawn. Which means it’s more dangerous because the CAP respawns too. The past week has been a mix of money and rank grinding. I separate them because generally a mission with an large reputation reward (Rep+++) doesn’t pay out a ton. It’s not that the money paid out is trivial, but it’s nowhere near what a good money making mission can pay out. Either way, the fruits of my labor where realized early on last week when Ranked up to Lt. Commander!

That leaves 3 ranks till Rear Admiral.

I just thought this tourist site was pretty cool…I need to visit there. 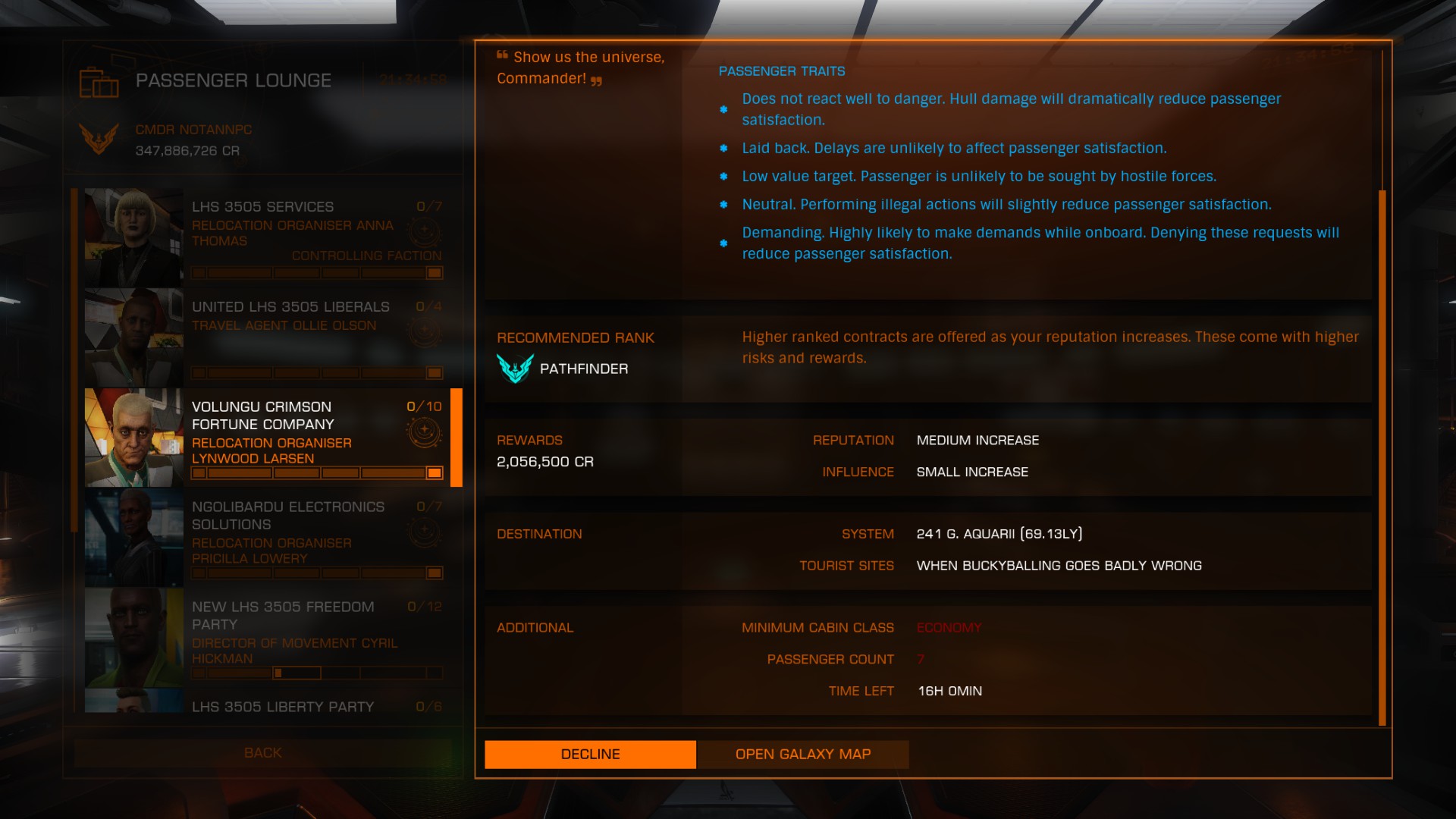 Over the weekend, Valthonis and I took our S&R birds out to Thargoid space to participate in a Community Goal! I was feeling some major solo mission burnout and realized I needed a change. Luckily there was a pretty nice distraction available to us.

I’ve pretty much steered clear of Thargoid space, but I’d been out to Blackmount Orbital before back when I fist hit up Felicity Farseer. The asteroid star ports are really cool looking. This was Valthonis’s first time to see one. The goal, as you can read above, was to deliver escape pods and other stuff to Blackmount Orbital. Which means we had to visit Thargoid attack sites. We hit up one in the system first. It was a prison ship. It was scary.

The external camera is doing some kind of weird lens thing on the ship. The Diamondback Explorer isn’t that long. 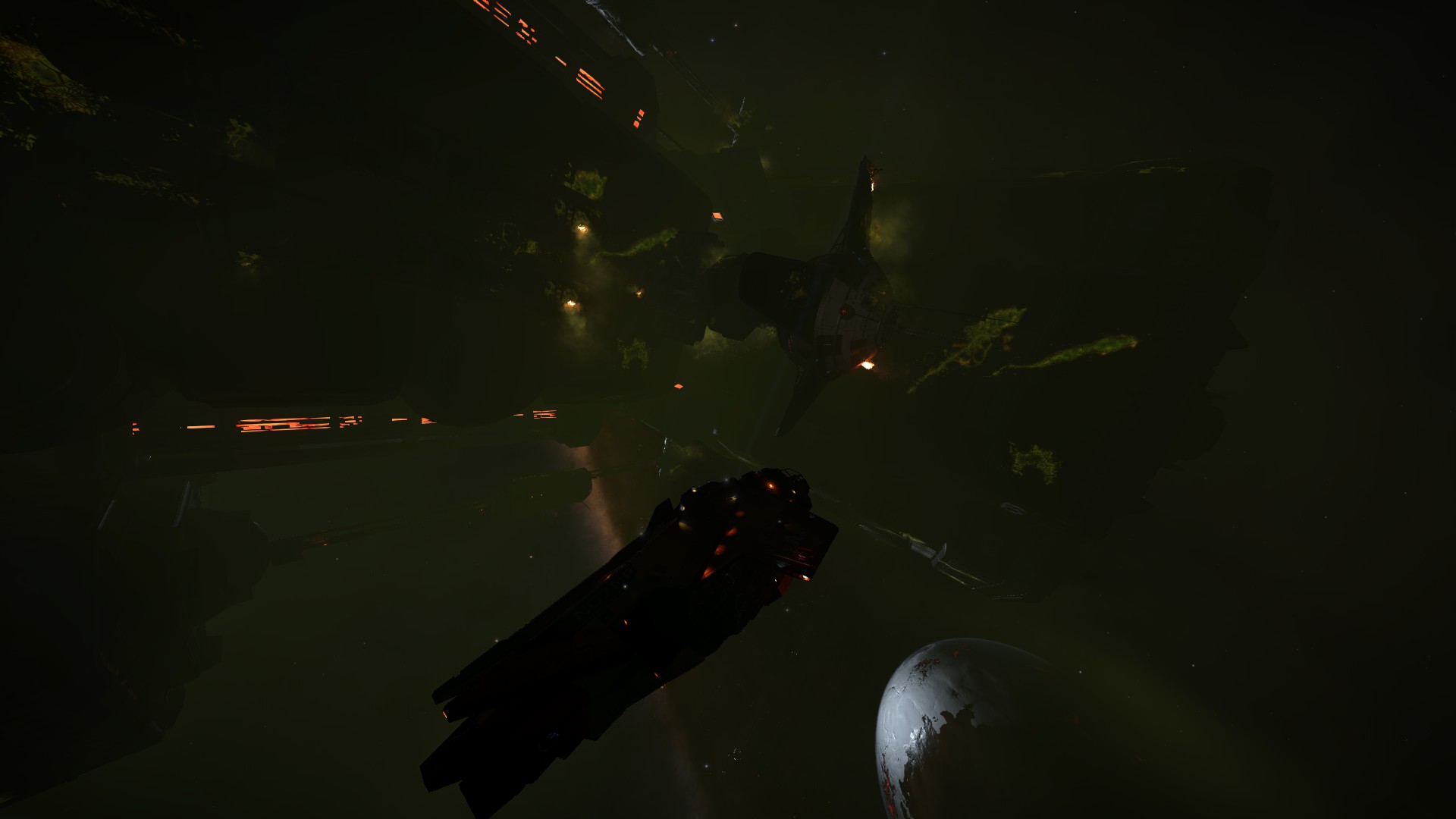 I forgot to get a wide shot of the ship to show just how massive it is. Spoiler: It’s huge.

We did a run each (Gamercow was there too). But the site really only gave us a couple of escape pods each. We were thinking about going to a station in a system over that was attacked and trying our luck there. Gamercow reported that a Thargoid showed up after Valthonis and I left to turn in. That pretty much locked it for us.

So we jumped next door and headed to Obsidian Orbital.

It is properly messed up, guys. And it’s even scarier inside. I’ve done this before, rescue missions from an attacked station. But this time I brought a long limpets and a Resource Collection Controller. Limpets are little drones that fly out and grab things, and drop them into your cargo hold.

With those guys doing all the hard work, all you have to do is sit back, watch the cargo hold fill up, and manage the heat from the damaged port.

Here they are following behind me after a run. They’re good little limpets.

We continued doing runs like that for a good chunk of the weekend before burning out and heading back. Both Valthonis and I hit top 10% for contributions. As of last night, I was still there. We started to pick up another Community Goal that wasn’t far away but that was scrubbed because it was for Thargoid kills. Which none of us are equipped for. I discovered this after I had called for Nothing Gained and Untold Fortune to be shipped down to us. Around 4 million to get both down there and another 4 to get back. If I say in the top 10%, when I go to collect I’ll make it back. Making the whole thing a wash. But I’m okay with that. It gave me a reason to do something different and learn how collection limpets work. And we saved a bunch of lives. So that’s good.

When I got back home to continue money and rank grinding, I pulled a mission from the board with a great payout but I needed a whole bunch of cargo space. It’d be an hour before Untold Fortune was delivered so look who came out of the storage hanger!

I haven’t flown Nothing Ventured in FOREVER. I forgot just how fun it is to fly and Asp. She was pretty well stripped down so it was easy to kit her out for full cargo (notice the lack of shields). I also took that opportunity to clean out a lot of extra or unused modules from my storage. I managed to get enough space to take the mission and set off.

After that I took a couple of planetary scan job missions where I set a Hammer record on sick jump height in an SRV. Totally landed it. 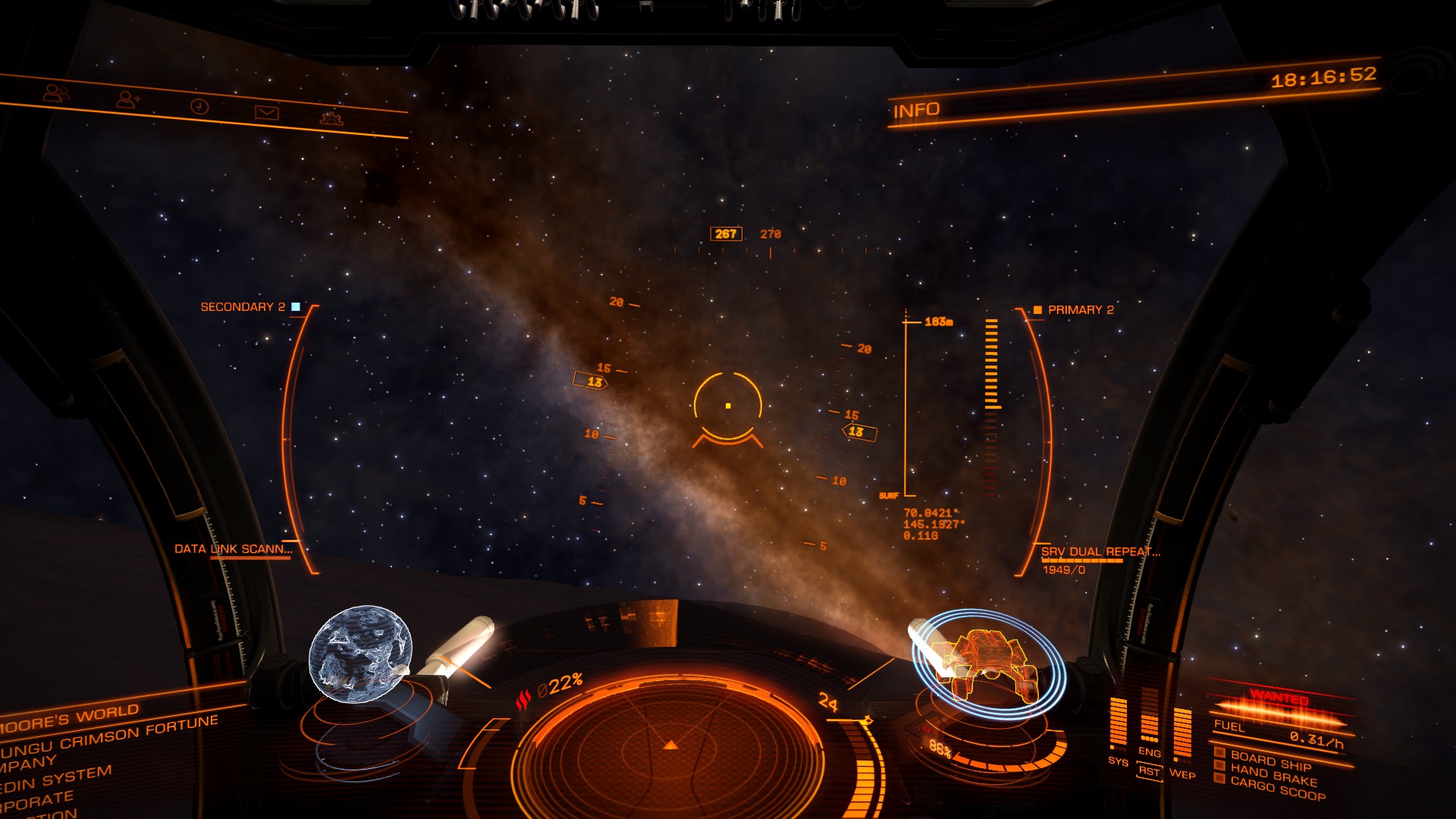 Afterwards, back in the Python, I took another planetary mission that brought me to this place. 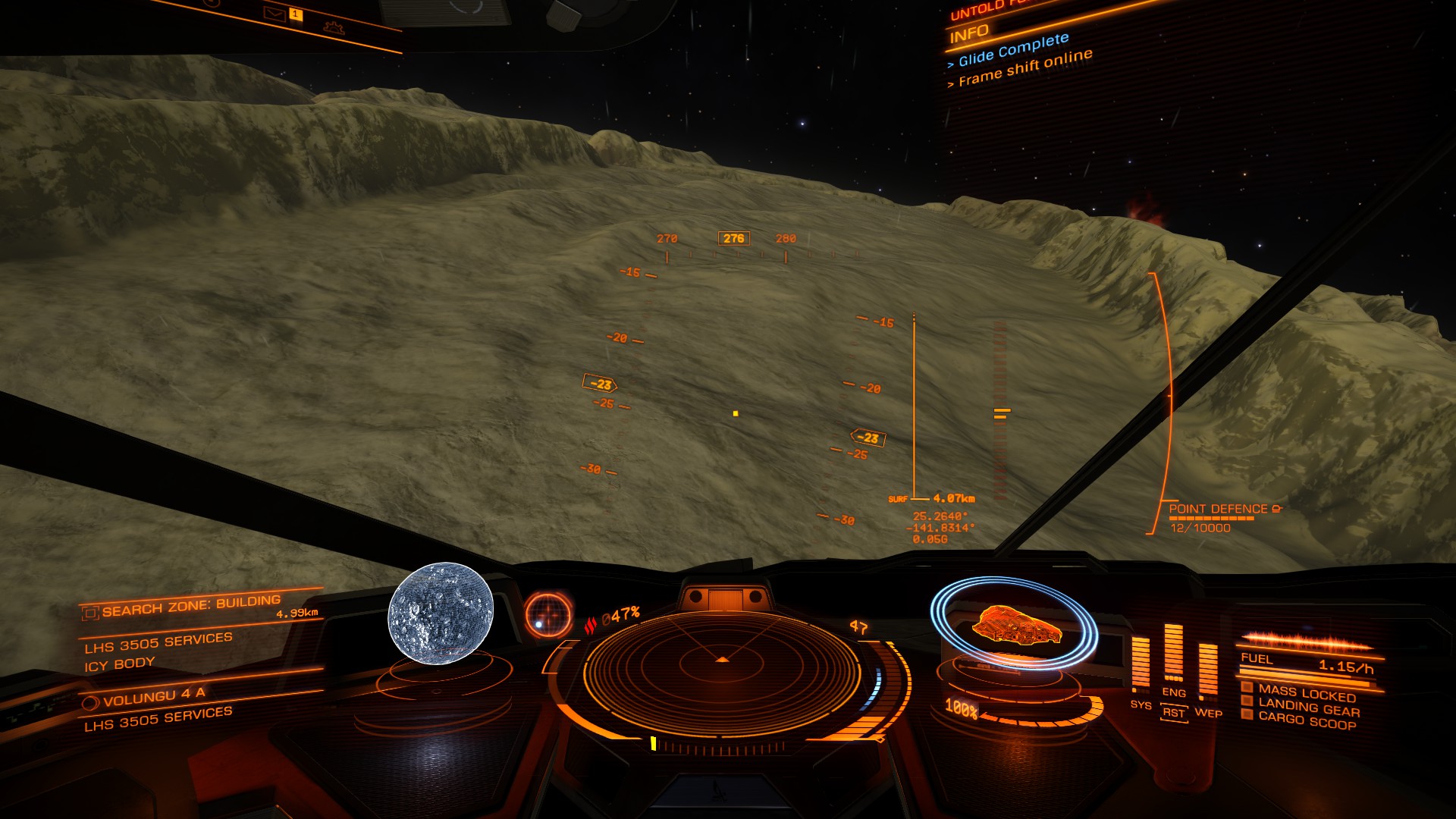 Bookmarked it and took note of the position on the planet because we’re putting together an SRV Olympics and I think this little box canyon would be perfect for it.

All of the weekend shenanigans paid off in spades as I scored another rank up to Post Commander! 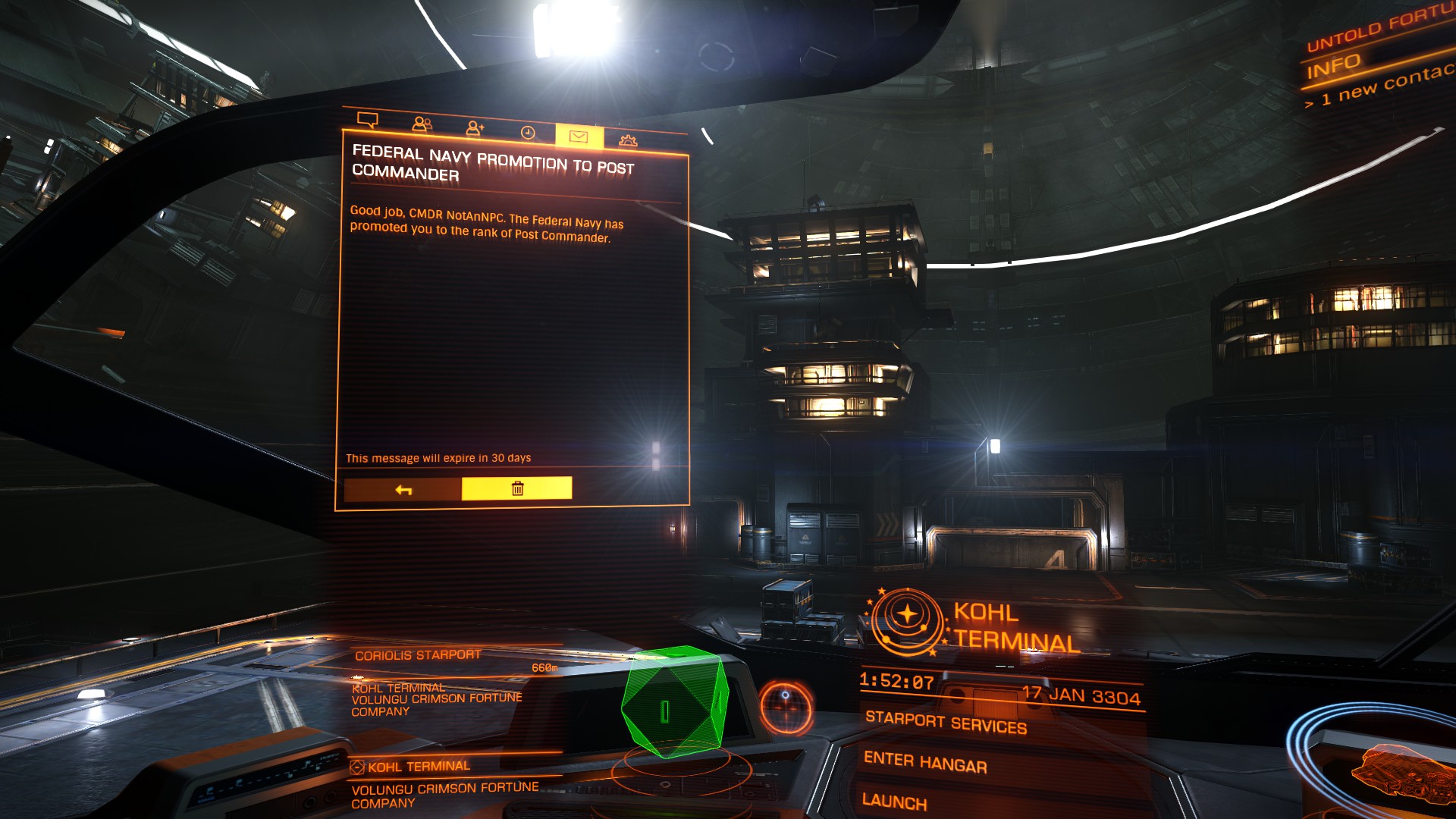 Now just the rest of this rank and Captain stand between me and the Corvette. It’s happening soon, guys. 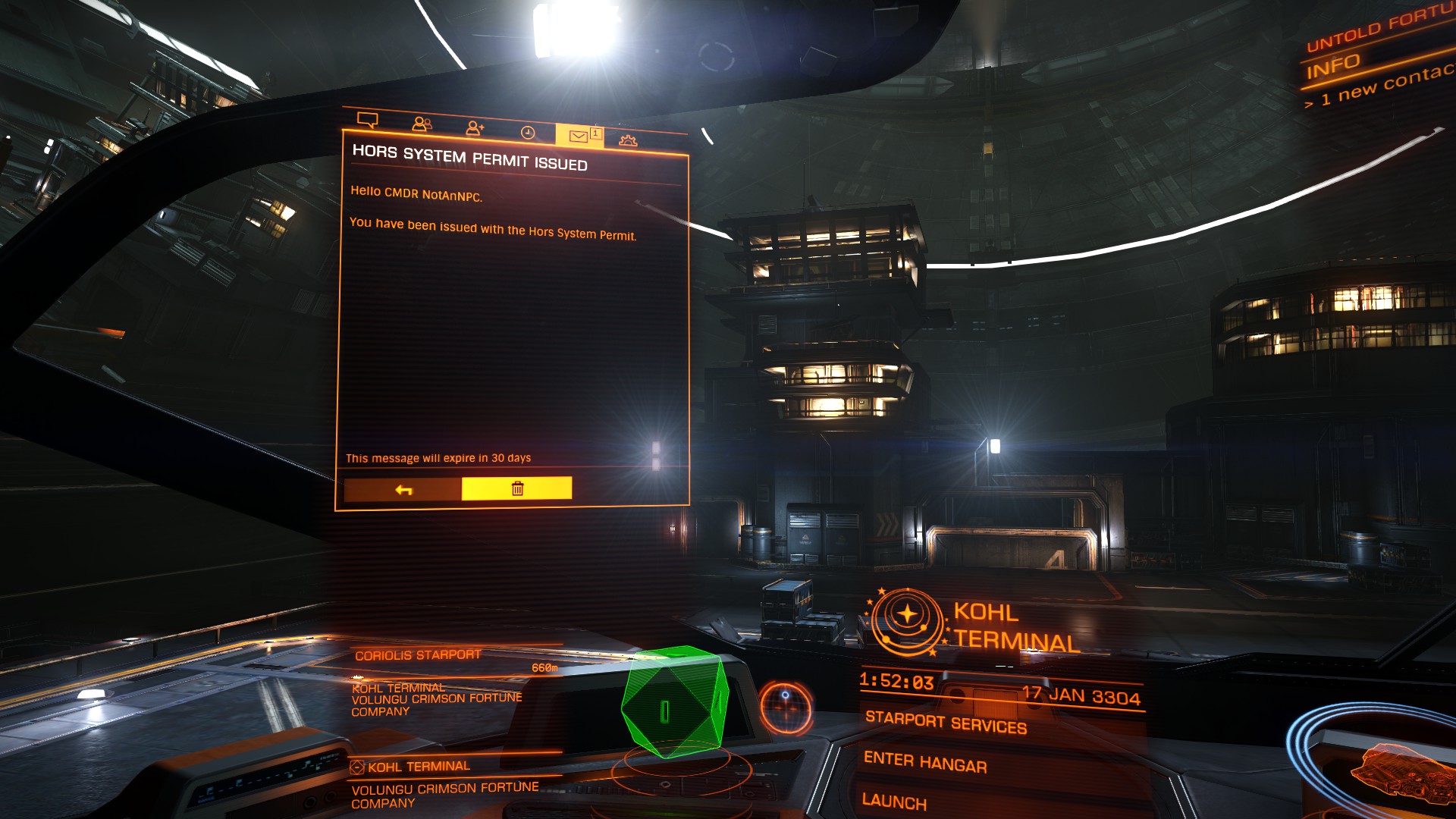 I have an idea for what I’m going to call it already….but…suggestions for Corvette names….GO!