I had a fun filled New Year and I hope yours was amazing as well!

The time off afforded me a lot of playtime and not just for Elite. I got to rock a lot of Overwatch with my online guild. I love playing with Hammer Gaming folks. They’re just the best.

Some of the key things I want to talk about in this log is SRV racing and multicrew, and turrets.

Valthonis and I were in discord chatting while doing separate missions in Elite when the subject of driving around in SRVs came up. We happen to both heading back to Olivas City and I suggested he equip a planetary hanger, buy a Scarab and meet me at a planet that was close by. And he did!

There he is making his approach.

When he landed, it took a few minutes to get acclimated and map controls to his HOTAS. One thing I’d like to see happen in the future is a revisit to the SRV and some of its features. Like, I’d love to be able to go into turret mode and control it with my TrakIR rather than mapping headlook to a joystick hat. It would make driving and SRV combat a lot easier. Which would have helped a lot this weekend. Most of the money I made where from Sentry Skimmer destruction missions. I feel like since the last update, those missions have gotten harder, but some of the locations you can pull are still easy enough to pull off solo…so long as there isn’t a Python flying CAP for the station…

But anyway, Valthonis got his Space Wheels and we took off and I gave him a little overview of what you can do with the SRVs. Chief among them, collecting resources for Engineer mods. That’s what he’s doing in the last 3 screenshots below. 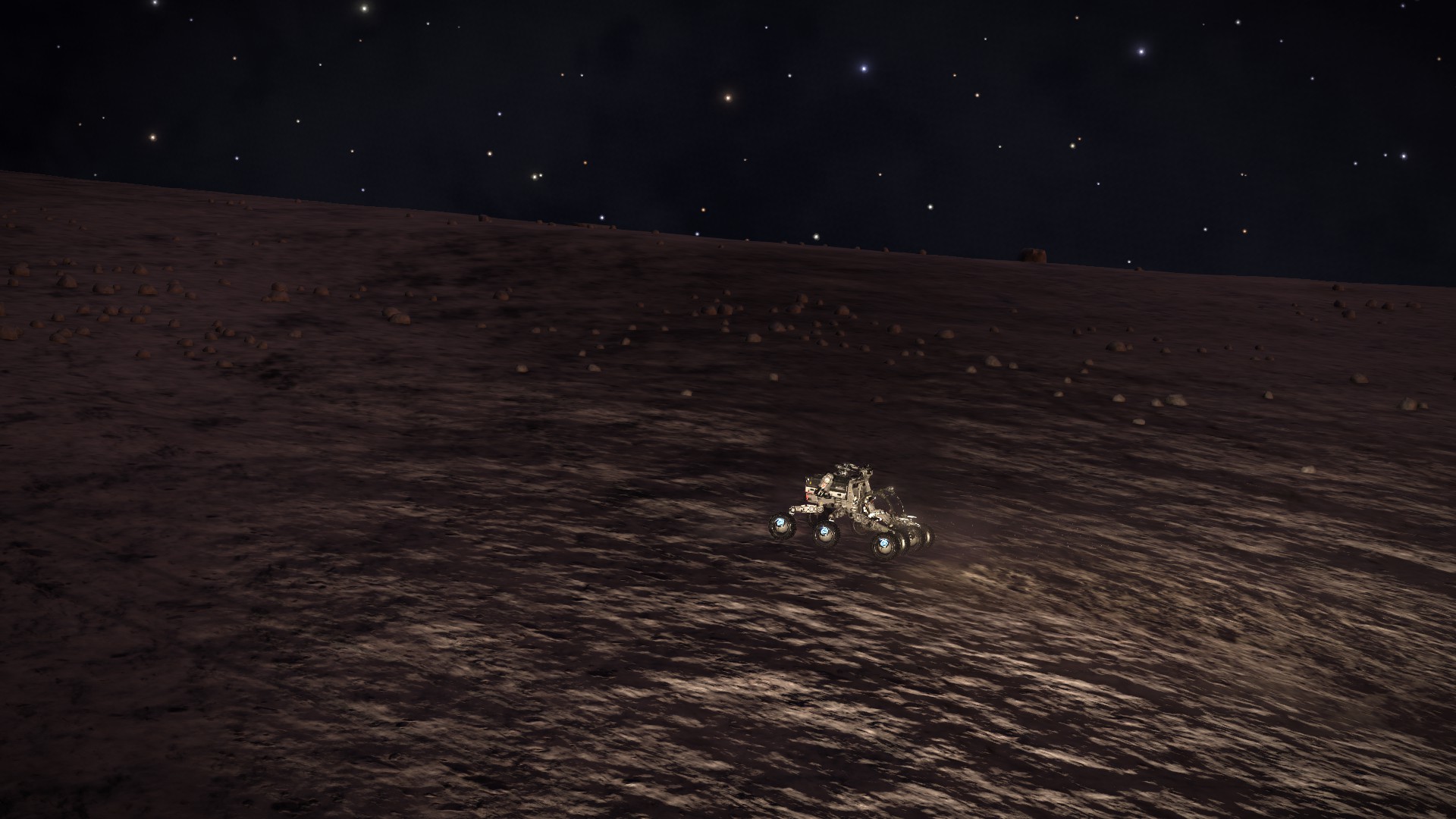 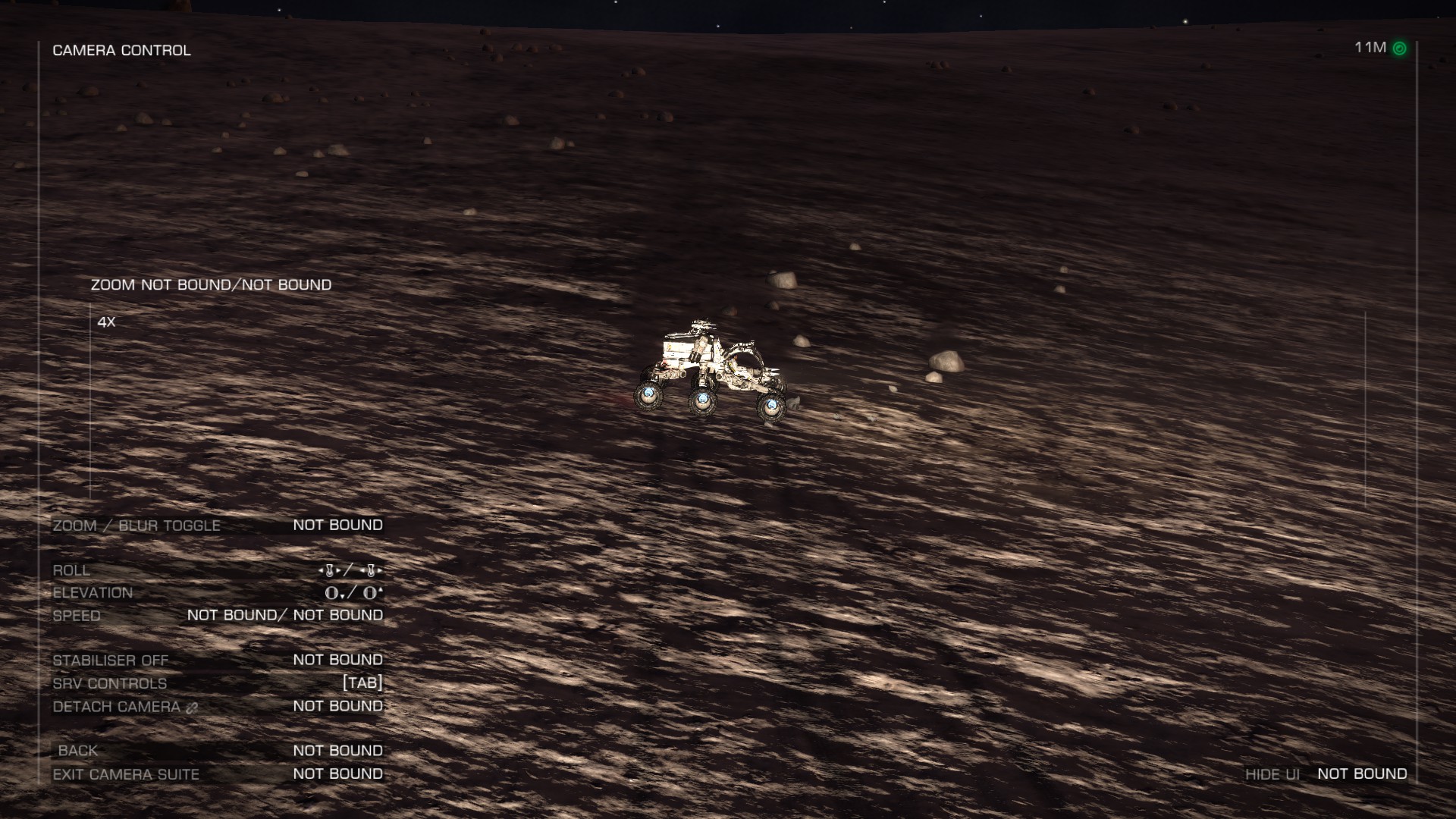 Figuring out how to use the radar/sonar doohicky in the SRV to find things got us a good distance out from where we started. Definitely far enough for our ships to take off back to orbit, but still close enough to be able to target the outpost that we used to rendezvous at when we arrived. So we set that as our target, lined up relatively close, and took off in a mad race to the outpost. There were sick jumps, unfortunate rolls, and maybe some cheating blaster fire…but in the end, I think it was a draw. I ended up near the finish upside down…but I was there around the same time. My goal is to get as many Hammer Wing commanders as we can together to have a mad crazy SRV rally. That was seriously so fun stuff.

After the race, I started doing jumps off his ship.

For as long as Multicrew has been live in Elite, I’d still never tried it until this weekend. Soon after the SRV shenanigans, we started talking about it and gave it a go. Part of all this was refitting the Untold Fortune with turreted weapons so the gunner position would actually have something to do. This brought on another first for me as I’d never used turreted weapons in my load-outs before.

There was a little trial and error and some googling required but we finally figured out how to get it all working. This is the first time anyone’s ever say in that seat. I’m glad it was Valthonis.

All told, multicrew was fun. I little buggy…but fun. I’d like to see it expanded. You can’t wing up if you’re in mulicrew and the percentage your crew mates get for what you do shouldn’t be what it is. It doesn’t incentivize using the feature.

Apart from all those things, it was a weekend of bounty hunting with friends and completing missions. A bunch of those missions got me in a little trouble in some systems. Valthonis caught on to this and killed me in cold blood right outside our home station. I was shocked at his actions as I’m sure you all are as well.

I’m kidding. I wanted to make all my active bounties dormant so I hopped into a sidewinder and let him take me out to collect.

But I made him work for it, I did.