Whole lot of failure tonight and a net loss….

Went out to the Nav Buoy to collect some bounties only to find some slim pickins. i managed to nab one that wasn’t worth a lot and he dropped some cargo. So i tried out the cargo scoop for the first time and headed to an Anarchy station to sell it on the black market. Didn’t get a lot for it. A couple of thousand. When I was heading back I notice a resource extraction site and decided to head there instead. These are generally located in the rocky fields of ringed planets. Like what I’m speeding toward in this pic:

I got in there and checked it out. It’s pretty. 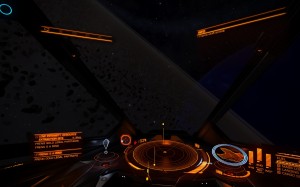 The problem was it wasn’t very well populated. I finally managed to find someone that was wanted and ended up not getting out of the way in time while we were fighting. Their ship was a lot bigger….kaboom.

Came back and decided to try a High Intensity Resource Extraction site…found and Anaconda that was wanted…that didn’t end well….

So net loss for the day…